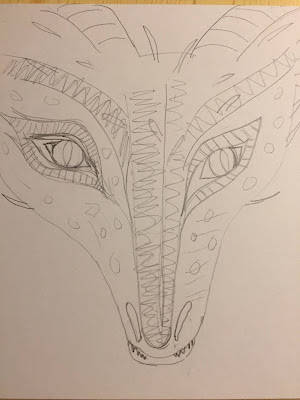 Gan as in Gandalf (the magician in The lord of the rings) and door as in a door keeper.

He keeps the door safe and open for me.

The doors to the unknown,

the doors to the creativity,

the doors to allowing and accepting,

the doors to enjoying the explorers journey.

the doors to loving and cherishing every step I take.

Originally he was a dragon, coming through a meditation with a important message. I instantly knew I wanted to draw him. I started later on that day and tried from the picture in my head but it was to hard. Then I started googling dragons and oh my, so many lovely pictures there are!

So I picked those who were similar to the picture in my head. And today I finished the drawing. But hey, some of you might say. Didn't you say it was a dragon? Yes my dear. It was a dragon. Or rather...Gandoor has many shapes. I believe I needed him more in the shape of a fox than of a dragon today. I believe he has many shapes; dragon, fox, raccoon. What more? I don't know. And it doesn't matter. One could expect me to be disapointed, complaining about the picture that didn't become a dragon. But you know what? It doen't matter that he came out as a fox. I feel the love anyway. And that my friend, is all that matters.